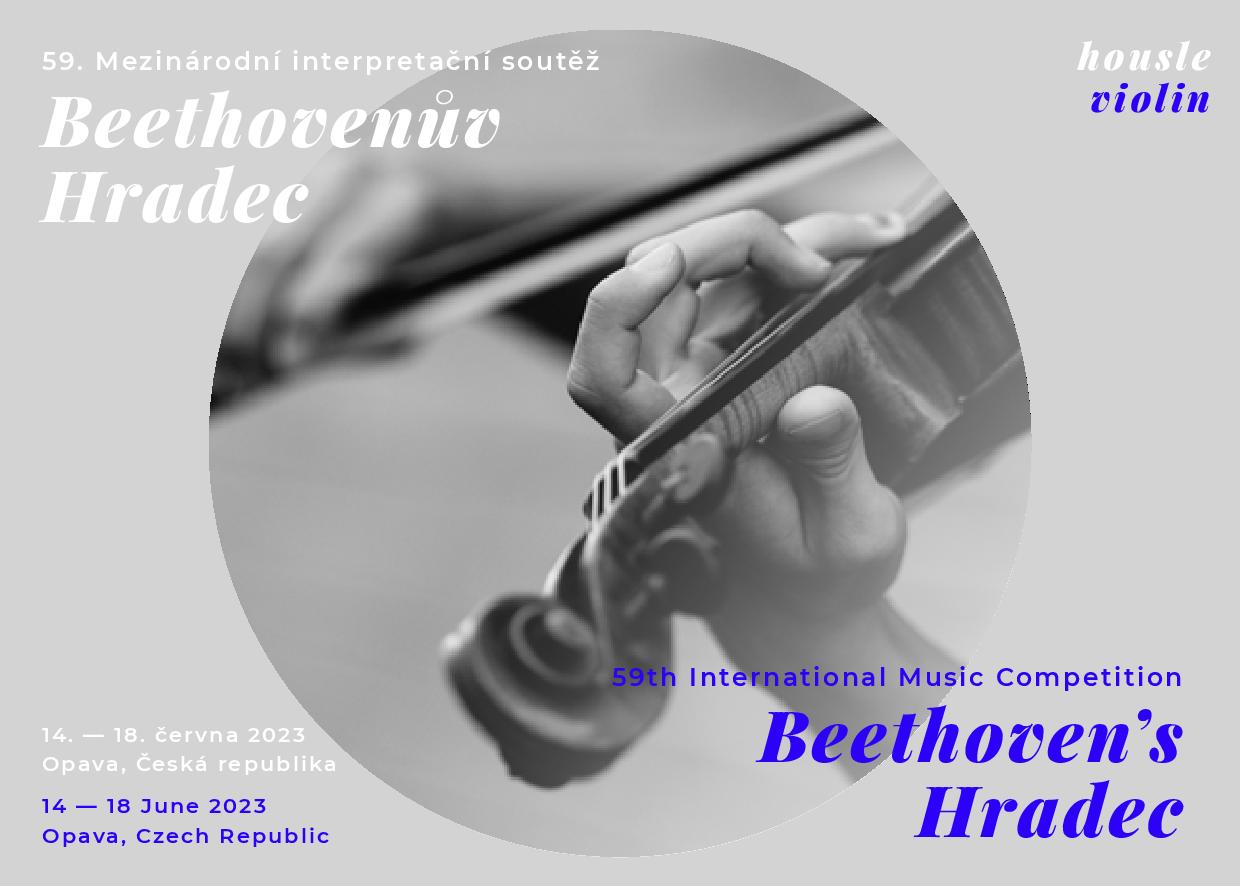 59th international competition Beethoven's Hradec is going to take place from 14th to 18th June 2023 in Opava. The participants will compete in the field of violin. The chairman of the jury is Jiří Vodička, concert master of the Czech Philharmonic. You can find all information about the conditions of the competition and the repertoire in the section For competitors or you can download it as a brochure.

Polar Television has prepared a great report from the 58th Beethoven's Hradec International Interpretation Competition. Take a look at the current year with us.

The reflection of the finalists of the 58th year was prepared by the chair of the jury Eliška Novotná.

Tomáš Vrána was one of the best rated candidates throughout the competition. Given his final participation in the previous year's Beethoven competition, it was clear that he was heading for the highest goals. This was evidenced by the extraordinary repertoire, which he decided to include for his performance at the competition. This is mainly Beethoven's last piano Sonata, Op. 111, which he interpreted in a monumental way in the second round, and which he supplemented with one of Olivier Messiaen's "Views of Jesus". Tomáš Vrána's piano performance was characterized by a clear composition, differentiated sound, interesting interpretive moments in the preference of hidden melodic lines, supporting sound and in the finale flawless cooperation with the orchestra in terms of rhythm and sound and stylistically very convincing performance of L. van Beethoven's Concerto in G major.

Vojtěch Trubač convinced the jury and the students mainly with his performance in the 1st and 2nd round of the competition. Unforgettable will remain his recital, which contained compositions from opus 118 by J. Brahms and Beethoven's Sonata op. 57. Vojtěch was fascinated by the clear drawing of the lines, which was far from obvious in the somewhat noisy acoustics of the Minorite monastery. All the details of his interpretation were set in a whole, it had a color sound and a wide dynamic range from soft pianissimos to full fortissimas. His play was in harmony in terms of the ratio of calm and excitement, which literally drew the audience. His performance in the final was very good, but in a stylish grasp rather somewhat Mozart's (Vojtěch played Beethoven's 4th Concerto in G major). Some disagreements with the orchestra did not contribute to complete persuasiveness either.

Satomi Chihara she was very concentrated and demonic from the beginning of the competition. She addressed the jury and the audience most significantly during her recital in the 2nd round. It began with a very convincing interpretation of a composition by Japanese composer Akira Miyhoshi. Beethoven's Sonata "Les Adieux" op. 81a was tightened in all its details and meanings, and Satomi Chihara was similarly embedded in the composition, also in the interpretation of Liszt's Variations "Weinen, Klagen, Sorgen, Zagen". Her final performance was again very interesting and widely straddled on a dynamic level. Her attempt to dodge the orchestra in the areas where she accompanies the piano, but led to a less interesting performance of these parts, and the fact that this was her first experience of performing with the orchestra also played a role in collaboration with the orchestra.

Beethoven's Hradec ended in a fantastic triumph of Czech pianists. The first and second prizes were won by Tomáš Vrána and Vojtěch Trubač

"Trubač seemed most comfortable during his performance and also managed to enjoy 'his' moment."

„Chihara of the three finalists played the most significantly. With the greatest passion, great concentration, a certain risk and courage, she put everything into her speech. "

"As if breathtakingly into a book from which not a single word can be skipped, Vrána's speech seemed like a narrative that told the whole story with the greatest complexity and truthfulness.„

The 58th Beethoven's International Piano Interpretation Competition knows its winners. This year's prestigious competition took place from 8 to 12 June in Opava and Ostrava. Forty pianists from all over Europe and Asia were proof that this competition has a good sound and attracts attention. The winner of this year's event was the 28-year-old Czech pianist Tomáš Vrána. Vojtěch Trubač, three years younger, also won the second prize from the Czech Republic, and the third prize went to Japanese pianist Satomi Chihara. Both Czech pianists are from the Moravian-Silesian Region, where many significant musical talents come from.

With financial support of